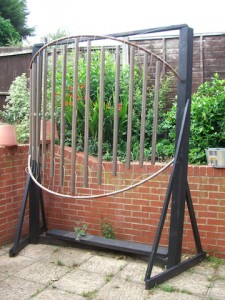 I am really pleased to announce that Suffolk Foundation have generously financed the recycling of some of the aluminium tubes from my thirty-one installation at Aldeburgh Music. The Purple Moments team have created an outdoor version of Big Mouth, the largest Waterfront Gamelan instrument we built with NACRO. The one pictured here is the prototype; the new one has less frame as it is set in concrete, and appears to float – and it sounds sweeter than the old steel tube did. It has been permanently installed in the play area at Ormiston Children’s Centre in Ipswich. Thank you Purple Moments crew – Gordon Soames, Dom Martin and Jason Catchpole.